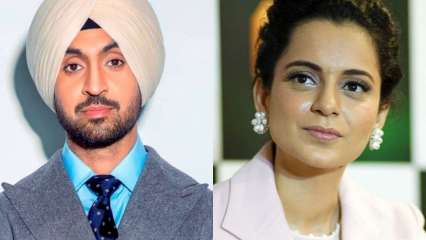 For almost two months now, the two celebrities have been engaged in a war of words on the micro-blogging site over a difference of opinion on the ongoing farmers’ protest.

On Monday, actor-singer Diljit Dosanjh responded to B-town star Kangana Ranaut’s latest barbs against him on a television interview. The singer took to Twitter to express what he feels about Kangana’s remarks about him — how she asked him to say that he is ‘not a Khalistani’ but he did not say it.

In his tweet, Diljit asks, “what is all this drama?”

“TV interview: ‘You ask me this, I give you this answer.’ What is this drama? They talk about the country, about Punjab. They want to push the debate to another angle. It means, you want to push this in another angle and project us to be as whatever you want. Wow,” he in a tweet.

In a separate tweet, he wrote, these so-called ‘teachers’ are the ones adding petrol to the fire. I know it is wrong to reply to rubbish. But she has crossed her limits and silence is not the answer to everything. Tomorrow,  they will call us anything.”

For the unversed, in a recent interview with a news channel, Kangana had said, “I openly challenged him to say just once that he is not a Khalistani, he didn’t say it. Youth have been misled, they have been presented with a dream about Khalistan.”

Kangana and Diljit’s Twitter war began when the latter lent his support to the farmers’ protest. She said in a tweet that he was encouraging farmers’ and inciting them to protest while he accused her of disrespecting an elderly Sikh woman who was at the protests and slammed her for misidentifying the 80-year-old as Shaheen  Bagh’s Bilkis Bano.

Worship Maa Siddhidatri on the ninth day of Navaratri

Archer out of second Test

How To Choose The Right Dog For Yourself