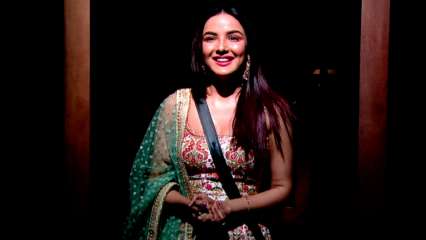 Jasmin Bhasin, soon after entering Bigg Boss 14 house as Aly Goni’s connection has been instigating him by talking against Rubina Dilaik and Abhinav Shukla. The Naagin actor has been spreading backlash for her behaviour on talking ill about the couple as the whole atmosphere became happy with the loved ones of inmates entering the house. She even ended up calling Aly as a ‘sidekick’ after he praised Rubina for her constant support.

Actor and singer Amit Tandon took to his Twitter page and slammed Jasmin for spreading negativity after re-entering Bigg Boss 14. He wrote, “Yesterday I felt as if I was pre-judging Jasmin and maybe it was just momentary but after seeing today’s episode I can say with confidence that she is filled with Negativity and all she did the whole episode was talk nonsense about others. REAL LIFE NAAGIN! #BIGBOSS14 #GETAGRIP.”

He also shared a video of Jasmin and wrote, “Now there will be those saying I am being insensitive towards her crying please save it and go see how she went to every person and only spoke badly and tried to turn even her ‘love’ Aly against Rubina. Even spoke badly to her sister! #jasmean #bb14 #bigboss14.”

Meanwhile, on Monday’s episode, Rubina told Aly that she is not getting good vibes from Jasmin. She was heard saying, “Mujhe vibes acchi nahi aarahi hai please ye hafta sambhal lena (the vibes that are coming my way are far from being friendly)… I don’t want to lose you. I did not get the vibes, and I was taken aback, please tu sambhal lena (please tackle it). Don’t let her know, tujhe bata rahi hoon kyunki mein dil mein kuch horaha hai… (I am letting you know as I’m feeling restless) and I don’t want to lose you, please take care of things.”

Netizens also called out Jasmin Bhasin for her misbehaviour with Rubina’s sister Jyotika Dilaik. They have been slamming her for constantly talking ill about Rubina and Abhinav showcasing her annoyance and anger towards them.

5 Best Puzzle Games To Play With A Partner Or Friend

Today in India and World History on July 25

Kumar Alok - April 20, 2020
0
July is the seventh month of the year in our modern-day Gregorian calendar. In older versions of the ancient Roman calendar, July...

Today in India and World History on September 22

Today in India and World History on August 07

Today in India and World History on August 30

6 Ways to Tell That Your Siberian Husky Loves You

How Filmora Video Editor Is Beneficial For You?

Best Item Songs Of Sunny Leone Which Were Massive Hits in...